This began as a post for Aisling Weaver‘s FuckMeFriday prompt, “Wire.” But it turned into something rather different. I’m posting it anyway. 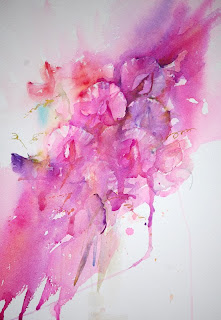 “There are so many options,” he said. As he spoke, he selected one bright bloom and then another. “Jasmine for grace and lilac for love.”
She looked on, more intent on the way his hands moved that on the flowers that he chose.
The shop was closed, leaving just the two of them, the baker’s daughter and the gardener. They had nothing in common and no reason to be here.
Nothing but a love for watching things grow.
He grazed over several groups of flowers before one seemed to strike his eye. “Ah, yes.” Lifting one last clump of blossoms, he turned back to her and ran the petals from her forehead down her nose. “And a touch of sweet pea for a sweet, shy girl.”
She blushed a deeper pink than all his blossoms, and the line he’d traced across her face felt hot. With his elbows braced upon his workbench, he unrolled a bit of floral wire and wrapped it around the stems.
When he was done, he held the little pink bouquet out like an offering. “Take it. It’s for you.”
She’d known that. And yet she hadn’t.
With one hand, she accepted it, took the flowers to her face and inhaled. As her eyes fluttered closed, she felt him take her other hand, his fingertips warm and rough. She marveled for a moment on the fact that hands so worn – so accustomed to coaxing life from dirt – could also touch so gently. That his spirit could know the cycles of the earth and the names of flowers. And how to touch a girl.
“They’re beautiful,” she said.
“Not as beautiful as you.”
And then, as she watched, he snipped another length of wire.
The green looked strange against her skin as he wrapped it around her finger. A half dozen turns and then a loose little knot.
He looked up again, his eyes full of questions. But he didn’t have to speak them.
“Yes,” she answered. Simply, “Yes.”