The Van Gogh Principle … or Why Making Stuff Matters

I’ve been watching an awful lot of Doctor Who recently (Don’t worry, non-Whovians. This post isn’t really about the show, I promise.). Today, I made it to one of the episodes I’d been most eagerly anticipating: Vincent and the Doctor. In this episode, The Doctor and Amy Pond go back in time to visit Van Gogh. When they meet him, the painter is clearly mad but also clearly genius, full of that artistic manic gleam that is at the soul of so many creative types – the secret feeling we tend to keep contained when trying to interact with normal people so as not to scare them away.

The Vincent in the show is the one who knows no one wants to buy his paintings but who cannot stop painting. At one point, he says specifically, “I’ve come to accept the only person who’s going to love my paintings is me.”

Painting is in his blood and in his soul. It’s what he does. And while this is all, of course, fiction, it’s true enough to the essence of the man, as we understand him today. 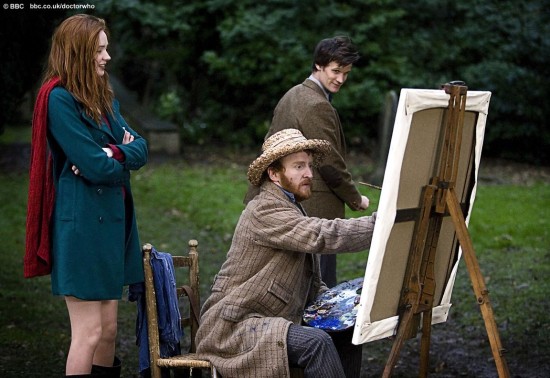 If you don’t know the story of Vincent Van Gogh, indulge me for a moment. He was a little crazy. A lot depressed. He failed at everything he did – got fired from his job at an art dealership, and after deciding to become a minister, couldn’t pass his entrance exam to study theology. He failed out of the missionary school that eventually did let him in.

And through it all, he drew. If you listen to my painting professor from college, he was rubbish at that, too, in the beginning. But he didn’t give up. He kept drawing and started painting. And one day, he discovered color.

He painted with such beautiful, beautiful color.

To look at what he painted, you would never guess the torment he would go through or that he would take his own life. All you would think is…joy. This is joy.

Or at least, I think you would. At the time, no one recognized the value of his work. He would have been destitute, were it not for the support of his brother, and even at that, he wasn’t exactly well off. No one bought his paintings. No one wanted his paintings.

But here’s the thing: he kept painting anyway.

Which brings me to the point of this ramble, which is not, believe it or not, that Doctor Who is awesome or that Vincent Van Gogh was an amazing artist.

Whenever writers despair of ever finding a publisher or ever selling a million copies—whenever writers consider giving up because they feel like failures, it drives me crazy. There is inherent worth to writing a story, no matter how many people ever end up reading it. No matter how much money it makes or how much critical acclaim it receives.

Ask the Van Goghs of the world. The Emily Dickinsons and Sylvia Plaths.

Even if it matters to no one else. It matters to me. And it had darn well better matter to you.